Behaviour - Learning Behaviours - 'The Whitehouse Way' and the Golden Rules

At Whitehouse Community Primary School it is our aim that all of our children will understand how to become independent, life-long learners. We will encourage the children to take control of their own learning and make good decisions about how to tackle obstacles they may encounter.

We have now introduced the 'Whitehouse Way', where we will cover a variety of skills through our assemblies and during our day to day life, in order to help all of our learners at Whitehouse Community Primary thrive.

Find out more about our learning skills below:

Staff and children have agreed four Golden Rules which apply throughout the school and which provide clear guidance as to the high standards of behaviour, which are expected at Whitehouse Community Primary School. The Golden Rules link closely to the Whitehouse Way and are:

There is a Behaviour Chart in each classroom with children’s pictures on it. These pictures are moved up and down, depending on children's' behaviour. These behaviours are recorded on a computer programme called Behaviourwatch. 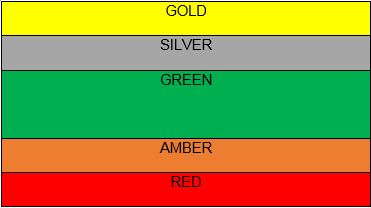 ALL children start the day on GREEN

ALL children start each session on GREEN to maintain a positive learning environment throughout the day and to raise self-esteem. There are 3 sessions throughout the school (before play, after play and the afternoon).

Children who remain on GREEN (or Silver and Gold) all week have an opportunity to take part in a 25 minute ‘Golden Time’ activity of their choice on Friday afternoons.

Children who behave exceptionally well by strictly following the Golden Rules and/or by displaying outstanding learning behaviours may be moved to GOLD. To be moved to Gold children must go above and beyond.

Children who have been moved to Gold will receive a gold certificate in the Celebration Assembly for moving to Gold for displaying a learning behaviour. Parents will be informed by text message.

If children have been moved to Silver, parents will be informed by text message.

Children in KS1 who are moved to AMBER will lose 1 minute of their golden time. In the first half term of each new academic year, this will be an immediate time out for children in Year 1.

There is no consequence in EYFS for moving to Amber.

This loss of Golden Time only happens if the children are still on AMBER at the END of the session.

Children in KS2, children who are moved to RED will lose 5 minutes of their Golden Time.

In KS1, children moved to RED will lose 3 minutes of their golden time. However, in the first half term of each new academic year, children in Year 1 will have immediate time outs.

In EYFS, children who are moved to RED will lose 1 minute - this will be an immediate time out.

Children who have remained on Green, or who moved back to Green from Amber after making positive behaviour choices, will be entered into a half termly draw. Fifteen children per phase are picked randomly in this draw, which takes place in the final Celebration Assembly of each half term.

How is Good Behaviour Rewarded?

The school’s approach to behaviour management is based around positive reinforcement. Children are encouraged to take more responsibility for their own behaviour choices.

The universal rewards for children adhering to the Golden Rules and displaying good behaviour are ‘Golden Time’ and the ‘Golden Draw’.

Children who remain on GREEN all week have an opportunity to take part in a 25-minute ‘Golden Time’ activity of their choice on Friday afternoons. Golden Time now takes the form of workshops, which are run by individual members of staff. At the beginning of each half term,  children sign up for a fun activity that they then take part in for the whole of that half term.

Quiet Achievers are those children who consistently follow the Golden Rules and continually make positive behaviour choices. These children will have remained on GREEN or made positive changes and been moved back from Amber to Green before the end of a session. At the end of each half term, these children are entered into a monthly Prize Draw. Fifteen names per phase will be drawn.

Golden Time and the Golden Draw are supplemented by prestigious rewards such as ‘Star of the Week.’ Each Friday the ‘Stars of the Week’ are presented with a Certificate at the school’s Celebration Assembly. This should be someone who has been on Gold or Silver during that week. One child per Key Stage is randomly picked to receive a £5 book voucher.

Each class may have other rewards in place such as table points or raffle tickets.

What happens when behaviour falls below expectations?

A child may be given time out to think and reflect on their behaviour after a verbal warning but before the move to Amber,

Children, who are on Amber at the END OF THE SESSION, will lose part of their Golden Time.

If a child has been moved to Amber (without being moved back up to Green) ten times in a half term, the parents will be contacted and asked to meet with the class teacher and Phase Leader. After this, any future meetings would be with the Phase Leader and a member of the Senior Leadership team.

If children still fail to comply in spite of the above guidance, they will be moved to the Red section of the chart. Children who are on Red will be given time out in another classroom to reflect on their action. All children who have been moved to Red, will be asked to go to Reflections. This can be for up to 30 minutes. However, if children choose to follow the Golden Rules, they can move back up the chart and reduce the time spent in Reflections. In addition, they will lose part of their Golden Time.

Children who move to Red will be recorded on the behaviour log on BehaviourWatch. An incident form will be completed which will clearly identify the rule(s), which has (have) been broken. Children can also be moved straight to Red for more extreme behaviours where a member of the Senior Leader Team is called.

If a child has been moved to Red five times in a half term, the parents will be contacted and asked to meet with the class teacher and Phase Leader. After this, any future meetings would be with the Phase Leader and a member of the Senior Leadership team.

Why might children be moved to Amber or Red?

Teachers may also need to use their professional judgements on occasions when deciding whether to move children to Amber or Red.

For more information on Behaviour at Whitehouse, please read our Behaviour Policy using the link below.